I happen to live in Cheyenne Wyoming, one of the towns shown in the YouTube video Fintan just posted. Not fun dealing with this snow so early in the season! I did get to leave work early yesterday and get a full day's pay

This week's snowstorm, when added to a storm earlier in the month, has broken a record for snowfall in October dating to 1906. This month's snowfall also equals half the average annual amount for the Cheyenne area.

CHEYENNE -- Just a month into the snowy season, local accumulation already is nearly half the annual average.

The National Weather Service reported as of 6 p.m. Thursday that more than 13.8 inches had fallen in Cheyenne over the previous two days, bringing snowfall totals for the month of October to 26.6 inches.

“Unthinking respect for authority is the greatest enemy of truth.” - Albert Einstein
Top

Some Chinese scientists pump silver iodide in the air to cause rain and because of the cold, fuck themselves with a bunch of snow:

Former vice president Al Gore stands to personally benefit from proposals he advocates to ward off global warming. Government solutions, such as Cap and Trade, may very well put billions into his pocket.

It is an interesting situation. If Al Gore gets his way and governments undertake drastic measures to counter the fear of global warming, then Al Gore gets rich – filthy rich. It makes one wonder what his real motive is.

Gore doesn't see a problem with this. “Do you think there is something wrong with being active in business in this country?” Gore told the New York Times, “I am proud of it. I am proud of it.”

Darn tootin' he's proud of it. Who wouldn't be? Spend a short eight years flying around the globe as a 21st century Henny Penny crying out the world is warming and end up reaping millions and millions – that's a feat to spark envy in Bernie Madoff.

Gore left the government in 2001 reporting a net worth of less than $2 million. Since then his personal net worth has skyrocketed. The New York Times reports that he recently invested $35 million in Capricorn Investment Group. Good for him. That's the American dream, to climb up the economic ladder as far as one can as rapidly as possible. Everyone should applaud his success.

But, when he stands to reap even more money should the rest of the world follow his advice, it is certainly fair to question his motives. Is Gore advocating policies like cap and trade that are necessary for human survival on the planet, as he claims, or is he advocating polices that stand to enrich him personally at your and my expense?

It's a fair question. When skeptics provide research that invalidates the global warming theory, alarmists are quick to point out that their funding comes from the energy industry. Shouldn't the same standard be applied to Al Gore? Isn't it reasonable for us to question Gore's enthusiasm about global warming in light of the financial windfall coming his way?

Sure it is, but you are not likely to see such questioning in the mainstream media. Any critics will be dismissed as “right-wing fanatics.” That's because, of course, global warming is the revealed truth and “settled science” - as if there is any such thing as “settled science.”

Instead we are being told to concentrate solely on his message and ignore the fact the Gore will become very wealthy if his proposals are enacted into law.

It's a great gig if you can get it.

Curious and vaguely related, for what it's worth -

So much in nature seems to be fractal.
Will it help us predict snowfalls in the coming ice age?
Top

'For the Snark was a Boojum, you see.'


For Ortega y Gasset, philosophy has a critical duty to lay siege to beliefs in order to promote new ideas and to explain reality. In order to accomplish such tasks the philosopher must, as Husserl proposed, leave behind prejudices and previously existing beliefs and investigate the essential reality of the universe.
http://en.wikipedia.org/wiki/Jos%C3%A9_ ... Philosophy

Why Copenhagen Will Achieve Nothing

The upcoming Copenhagen climate summit, officially and ponderously named &#8220;COP15 United Nations Climate Change Conference Copenhagen 2009&#8243;, is aimed at reducing the emissions of the developed world. The main players, of course, are the US and Western Europe. There is a widespread perception that if the US and Western Europe could only get our CO2 emissions under control, the problem would be solved. Nothing could be further from the truth.

To see the gaping hole in this idea, it is only necessary to look at
the historical record of carbon emissions. Here is that graph: 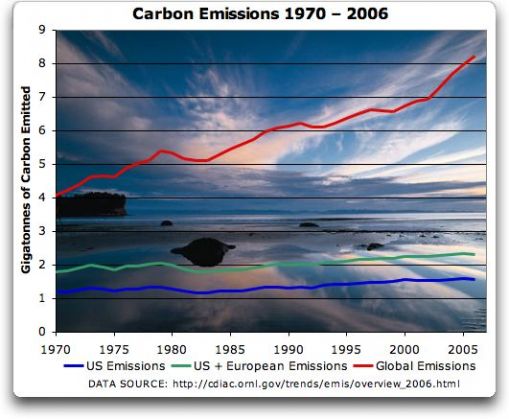 These are meaningless attempts to hold back a rising tide of emissions. Me, I don&#8217;t think rising CO2 levels are a problem. But if you think it will be a problem, then you should definitely concentrate on adaptation strategies .. because mitigation simply isn&#8217;t going to work.


Gore left the government in 2001 reporting a net worth of less than $2 million. Since then his personal net worth has skyrocketed. The New York Times reports that he recently invested $35 million in Capricorn Investment Group.

Where did that piece of pigshit - who never worked a day in his life - get $35 million?!

It's common knowledge that a lifetime on the public payroll can be a goldmine but this is astounding!
Top

Where did that piece of pigshit - who never worked a day in his life - get $35 million?!

Fintan, please explain that stupid carbon emissions chart you posted. If all the emissions are not coming from a combined US and European source, then where is it coming from? "The rest of the world" explains nothing, unless you mean China.
Top
Post Reply
726 posts